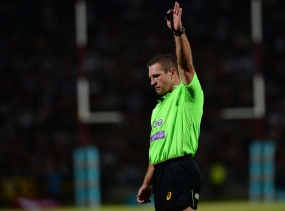 Lourens van der Merwe has had a great refereeing career- rising to Currie Cup, Super Rugby and Test levels. He is the 67th of 75 South African Test referees since 1891. He is now the chairman of referees in the Free State. And here he is answering readers' questions.

I am a bit fuzzy on the following.

The definition of a tackle reads as follows:
A tackle occurs when the ball-carrier is held by one or more opponents and is brought to ground.
A ball-carrier who is not held is not a tackled player and a tackle has not taken place.

So from the scenario you referred to, the white player wasn't held and brought to ground, and, as per definition, that is not a tackle. May the ball-carrier get up with the ball - yes, as a tackle didn't occur. The fact the white player rolls over two or three times before he gets up, I agree is not always just momentum...

Question: The last scrum Crusaders vs Stormers. The ball is passed from the 5m line into the goal area and then kicked over the dead-ball line. Is it not the same as being carried over. Should the scrumhalf not have kicked forward over the touchline? Was it not supposed to be a scrum for the opposition?

You are 100% correct that the ball was taken into the in-goal by the Crusaders, and then made dead. So first of all, if the defending team takes the ball into the in-goal area and the ball is made dead by either team, the restart is a five-metre scrum for the attacking team. However, in this scenario, the scrum started with the clock already over 80 minutes. If the ball becomes dead after time has expired, the game ends. Even if the Crusaders player knocked the ball on with that last pass, the referee couldn't award the scrum to the Stormers for a final play. The game would've ended because time was already at 81.36.

Question: At the start of a scrum, can the non-throwing in scrumhalf retreat to his No.8's foot (i.e. the offside line) and then position himself along this offside line right across the width of the field? This is pertaining to Law 19 (28 & 30) World Rugby Laws 2018.

Law 19.28 Prior to the start of play in the scrum, the scrumhalf of the team not throwing in the ball stands:
a) On that team’s side of the middle line next to the opposing scrumhalf, or
b) At least five metres behind the hindmost foot of their team’s last player in the scrum and remains there until the completion of the scrum.

In summary, the defending the scrumhalf has three offside lines:

1) both feet behind the ball
2) the last feet in the scrum, over the width of the field, and
3) 5m behind the scrum.

Question: At the toss before the match, who tosses the coin and who calls heads or tails? Do you let the coin fall to the ground or is it caught before it falls to the ground? If the coin is allowed to fall to the ground, who picks it up? Is the coin shown to both captains? What choices does the captain have, who won the toss? Must the winning captain say which way he wants to play immediately or can he say: "We'll decide when we get onto the field"?

Law 6.3 DUTIES OF THE REFEREE BEFORE THE MATCH

The referee organises and manages the toss. There is no direction or protocol in how to toss the coin. I reckon the important part here is that both captains are comfortable with the fact that the coin toss was fair. If the coin falls to the ground, it would be good management by the referee to call the outcome and show the result to both captains by picking the coin up himself.

The winning captain can then choose either to kick-off or choose an end. (He can not choose to receive the kick-off.)

As a gentleman's rule, the captain may indicate his option 20 minutes before kick off. This usually happens when the captain chooses an end, but only decides which end to start from during their warm-ups, especially if it's a windy day.