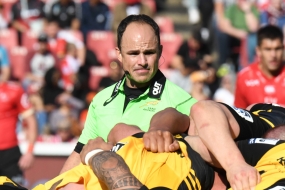 Jaco Peyper is off on Super Rugby duty, but still has time to do duty answering readers' questions. He does so from Brisbane while he was preparing to referee the match between the Reds and the Chiefs, which he refereed excellently.

Question: Has the no 'over the top tackles' been over ruled?, the games I have seen lately has seen players flying over the tackle and taking out opposing players without the ball. Also how do referees judge which team is at fault at the scrum, if the prop on one side is weaker than his opponent the stronger prop is penalised ?

i. I assume you mean by “over the top tackles” the players clearing out over the ball carrier? If so -yes – the arriving players may remove them, but they may not “tackle” a non-threat. They may only remove players over and within a metre of the ball (coffee table), and it needs to be with a safe and recognised clean-out technique (using arms/ without diving in). However it has been agreed that in the dynamics and forces these big men run into each other that eventually they may end up off their feet legally.

ii. Scrum question: referees at professional level undergo extensive training by SCRUM coaches in workshops before and during the season. Scrums are generally at pro level also reviewed by a specialised, neutral scrum coach to give the referee and the teams feedback on legalities. Balie Swart has been used for a number of seasons in such a role at SANZAR with great effect. It is obviously very specialised and technical area, and could be hard to follow if one is not growing with the scrum developments over the seasons. The referees put in a lot of analysis work pre-game here, probably the most of all phases.

Finally, to answer your question – a dominant prop sometimes gets penalised because he gains ascendancy through illegal technique (various). Also a team cannot wheel through one dominant side of the scrum before scrumming forward as a unit on both the loosehead and tighthead side as per agreed law application between the Tier 1 Coaches and Tier 1 referees.

Question: Game: Lions vs Stormers (7 April 2018) Time: 40:04 - why was the Lions flyhalf allowed to crawl with the ball with a Stormers player over him?

Yes we clearly have two different scenarios when these ‘pictures’ play out.

i. When a tackle is complete (ball-carrier held and brought to ground simultaneously) – its easy to judge as the ball-carrier cannot regenerate himself /propel himself forward – he has to pass, place ball.

ii. When there is no completed tackle as in your scenario, it’s a bit more tricky to judge (not in theory). The ball-carrier is allowed to get up and play again without releasing the ball. Now we need to judge dynamic picture – is he actually trying to get up or even one continuous movement vs crawling? Decision: If you judge that it was a crawl in real speed – it should be a PK against Lions 10. If you judge that as one continuous movement in real speed– play on.

Question:Here is a scenario: it’s a maul and the player that has the ball, his head is the maul so he clearly can’t see where he is going. The player with the ball steps on a guys shoulder that’s on the ground with minimal force. Here is my question should the ref send him off because of reckless play or show common sense and appreciation of the game that this stuff does happen and move on with the game

If you can judge without a doubt that the player had no idea and should not reasonably have foreseen that his action could be dangerous or illegal. I am with you. The game can move on as the player who put himself at the bottom of the maul is the actual one who causes himself the danger, when eight pairs of boots of the opponents move over you there is a good chance that one of them may step on you.

However – if the player who steps on the player on ground, clearly knew about the player and the dangers and moves to step on him – different story, should be dealt with firmly.

Question: I would like your opinion on the SANZAAR disciplinary committee ruling in the case of Reds prop Taniela Tupou's tackle on Stormers wing Craig Barry. To me, the objective facts are clear: the `tackle' is late, it is high, and there is no use of the arms.

The disciplinary committee confirms that. Yet it then makes a makes a judgment based on the player's subjective intention: ``while attempting to use his arms...'' In other words, the action doesn't warrant a red card because, although the tackle was high, late and armless, the player had intended to use his arms and so there was no intent to breach the law, just recklessness. Does this mean that referees and disciplinary committees now have to take into account a players' intention in evaluating whether he breached a law?

Unfortunately not allowed to have an opinion on citing and disciplinary procedures.

REFEREEING: What I can add though is that right or wrong is determined factually (not intent), then once established as illegal – Intent and circumstance may be used only in sanction measurement example.
Deliberate / follow through / force = aggravating factor or
Clearly accidental / lack of any force or impact = mitigating factor
CITING: have a different process and burden of proof to refereeing.

PS: A separate issue but I also cannot believe that the referee on the field failed to take action (or at least ask for a television review). He was right there in the picture, a few metres away, and so I can't believe that neither he nor one of his assistants saw it. Sometimes we make mistakes, and there are 15-20 cameras to expose ours! It would not have been deliberate mistake, but human error.

Question: Do the kicker's players have to be behind the kick at a penalty? If so, is a hooker allowed to walk, in touch, ahead of the kick to be ready for the line-out? If a player could run ahead in touch, would he be allowed to take a quick throw-in from touch?

All team-mates have to be behind kicker if they are in the field of play. Yes, hooker may advance in touch, but he cannot take part in the game from an offside position when he returns to take part in game. The quick throw-in also needs to be with the ball that was kicked into touched, before anyone else touched it.

Question:A player is tackled into touch. The opponent wants to get the ball but the tackled player holds onto it.

What in practice should you do?

You have options as a referee – if the tackled player clearly prevents a quick throw in opportunity, it should be a Penalty kick 15m in from touch on line of touch. If it has clearly taken away a big opportunity for the opponents to score points or relief defensive pressure – a Yellow card is an option.

But lets say the attacker wanted the ball and nothing was on attacking wise at that point – the referee may use his judgment and manage the situation without sanction and issue a warning. The refgeree needs to be clear in his mind that nothing was taken away from attacking team though.

Question: To tackle above the shoulder is against the laws of the Game. So is a skew scrum feed. Why is it then that most refs ignore that law!? I just saw Van Zyl of the Bulls turning his shoulder towards his scrum to skew feed a scrum. Please, help me understand.

Young players see this and ask us coaches those questions.

The Law has changed last year. Players may stand on their side of the centre line of the scrum and therefore be closer to ‘their team’. And then the feed needs to be hooked back (strike by hooker) – then the feed is fine in terms of law. However the feed that goes in at an angle that does not require the hooker to strike for it to be won = should be sanctioned.

The difference between the two laws philosophically is rather big – the Springbok, All Black, England, Ireland, etc coaches never fail to encourage us to referee dangerous play firmly – as it makes for a positive game.

They are never too critical about the feed, as long as it is credible in terms of new laws. Cause they all know that the “opponents infringed” and then they have to feed to get ball back into play, and why should they (attacking team) be disadvantaged with a perfect feed when they have 1 less player that can scrum now (as no 2 needs to strike) and the reason the have to feed the scrum is because of a mistake by the opponents.

So philosophically all Top coaches feels it is good for the game to have the attacking team put it in just credible and having a slight advantage having the no 9 closer to his side – promoting ball back into play versus more resets and Penalties if it is pin point straight down the middle where most hookers cannot reach with scrum height – having the defenders (who infringed and caused the scrum) having a man advantage. Therefor the law change was made to address the feed and they see this as a less punitive area until a team is clearly cheating to protect their weakness at scrum.

Question: Why does the coach need to stay inside the box? And where does it stand on paper that he must stay there? And if so, he can go anywhere next to field as long as it is behind barriers and not in play of field, e.g. behind dead-ball line.

World Rugby has clear guidelines and a strict protocol about the Coaches Box and Technical areas next to the field.

All National unions including SA Rugby subscribe to these sideline protocols as it is there to protect the integrity of the game, and organize the sideline so that teams and referees can continue unhindered of influence on the field.
See World Rugby's protocol below.

(i) No more than two (2) medically trained persons and two (2) water carriers per team are permitted to operate from the technical zones.

(ii) The two medically trained persons may not be the team head coach, Team biokineticist(s), team conditioning staff, and/or a substitute player(s).

(iii) The two water carriers per team that are permitted to operate from the technical zones may be the team biokineticist(s), team conditioning staff, substitute player(s) and/or an assistant coach(es). The water carriers must wear the Technical Zone bibs provided by the tournament organiser at all times.

(iv) The replacement bench and the location of the coaches should, wherever possible, be outside the playing enclosure.