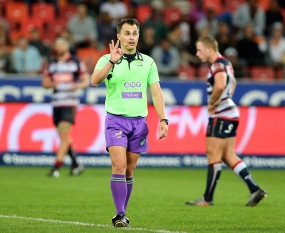 Marius van der Westhuizen, officially ranked amongst the top 18 referees in the world and a man who has refereed in many countries, sits down to answer some readers' questions before going off to referee the match between the Bulls and the Brumbies.

His next Test, by the way, is Australia vs Ireland in Australia.

Question: Black flyhalf is attacking and kicks a ball with his knee in an open play. The ball goes into the in-goal of Red team. Black flyhalf dives and scores a try. What action should a referee take?

I take it the attacking player was not in possession of the ball when he “kicked” it with his knee? A kick is an act made by intentionally hitting the ball with any part of the leg or foot from toe to knee, but not including the knee. If the player was carrying the ball and dropped it onto his knee in an attempt to kick it if would be a knock on.

If he was running and in an attempt to regain the ball intentionally hit with his knee would be play on as that is not a knock on. The referee can the award the try. Can be rather confusing but if you break it down its actually rather simple.

Question: A tackled player falls with his back towards his own team. The law requires him to do something immediately but not what he does. Why do referees allow him to turn his body towards his team thus eliminating the possibility of the tackler's side getting the ball and not making the game so predictable? If the law is correctly interpreted this should not be allowed.

As you can imagine this game of rugby and specifically the tackle phase is a very dynamic phase and happens a very high speed. As per law 14, Subsection 7a The player is allowed to place the ball in any direction after as tackle. The important part of this law is he must do it immediately. If there is a delay and he prevents the defending team to gain possession he should be penalised.

Question: If a game is 1 min from the end and team A lead by 3 points and lightning starts and the game is stopped must the game been played over or does team A win?

Question: Who polices offside lines during a match? I ask this, as it seems on the way to following crooked throws into scrums onto rugby legal scrapheap.

Each big match now has four officials - referee, two assistants and the TMO. Are the assistant referees allowed to whisper in the referee's ear to tell him about offside, especially the backs at line-outs? Is the TMO allowed to do a check-check in this matter? In fact is the TMO ever allowed to check-check for offside outside of the review of a potential try?

Offside kills rugby, but with lines all over for various forms of offside, the referee needs all the help he can get in the days of rapid defence.

Marius van der Westhuizen: Hi Anthony. The offside is the primary role of the referee, However, in all games where the assistance is appointed by the governing body of that competition, the assistant referees have input on the management of the offside lines.

You are 100% correct, Offside kills the game and is a major priority for us as referees. If there is a clear and obvious offside in the lead-up to a try, the TMO can inform the referee and they can overturn the decision.

Question: Please, explain the corner post to me. It used to be a part of touch-in-goal. If a player touched it, no try. If the ball touched it, drop-out. Now it seems just a decoration.

If the ball is kicked and it hits the corner post and stays inside the field, play will continue. It is very similar to the goal post these days. If you want to score a try against the goalpost or padding you also need to score it at the base of the goalpost.