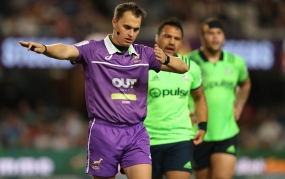 Question: If a referee calls a turnover good to side B who then form a maul and the ball becomes stuck in the maul why does he give the side B the put in at the scrum? Angus Gardner SA vs Argentina

Unfortunately I cannot recall the event so cannot comment on that, but within law, if the ball is turned over and the team now in possession form a maul and that maul becomes unplayable, the ball should be turned over.

Question: Hi Can a hand off be to the face as all tackles have to be below the shoulder. Does this also apply to the fend? Thanks Andrew

Yes the ball carrier is allowed handoff / fend off an opponent anywhere on the body including the face as long as it is done using the palm of the hand.

There are various ways to train, But I find interval training the best preparation before fitness testing. I regularly read the law book, attend workshops and referee sessions to stay on top of the laws and application thereof. Unfortunately the only way to improve is through experience. Referee as much as possible to gain the experience as this will help you going forward. Get performance reviewers or assessors to view your games to point out where you can improve.

Question: Time is up and team A gets a penalty say on team B's 22m line and indicates they are going for the line-out option provided within the laws. When kicking it the ball peels off the kicker's foot and crosses the dead-ball line.

i. Is the game over as the penalty option was not completed?

ii. Does team B get the choice of scrum from where the ball was kicked or a 22 dropout as again the penalty option was not completed.

Rather a difficult technicality.

The team would normally have two options, 22m restart or a scrum at the point where the penalty was awarded. But because time is up and the ball was made dead by the kicker, That would be the end of the game. I hope the kicker’s team-mates will forgive him.

Question: Hello! I am a referee in the Austrian Premiership. My question: on a muddy, very windy day, a 22 drop-out does not cross the 22 and gets blown back into touch-in-goal. Nobody touches it. Call: scrum on the 22 in the middle (seeing that the ball was never live, 12.10 - advantage does not count), right?

Kind regards and thank you!

Law 12.10 is only applicable for Restart Kicks and Kick-off’s (Following a score) and not for 22m drop-outs (Following a touchdown) . This is a tricky one as advantage can be applied as per law 12.16 but not in the instance as you explained. Law 12.12 (c) will apply in this instance as the first infringement is the ball not crossing the 22m line.

Advantage (Law 12.16) will be applied if the ball does not cross the 22m and is played by an onside opponent.

Question: Can you clear up offside in "Open Play" and does it technically exists - per law 10.1, it does seem to exist and a player offside in open play can be penalised if that player plays the ball, tackles a ball-carrier or prevents the opposition from playing. Can you clarify?

In addition, this happened in a recent game during open play - Red 9 passes to Red 10, the balls hits Red 10 in the head and goes forward. Red 12 who was standing in front catches the ball. Would you deem Red 12 to be accidentally offside and award a scrum to the opposition or because Red 12 intentionally played the ball (by catching it) would you deem this offside and hence award a penalty to the opposition.

Your thoughts and explanation would be very much welcomed.

Thanks and regards
Graham

To answer your first question. Yes, it does exists as per law 10.1 Everyone who is in front of the ball when it is played is technically offside. We don’t penalise them because they are normally put back onside by team-mates before they have an impact on the game.

“A Player is offside in open play if that player is in front of a team-mate who is carrying the ball or who last played it”.

That “played” part is very important. Definition of played: The ball is played when it is intentionally touched by a player.

You should ask yourself, Did No.10 Red Play the ball or did the ball just touch him? If the ball just bounces off his head one can argue that it was not played.

If the ball just touched him, the No.12 in front of him is technically not offside provided he was onside at the time the No.9 played the ball.

If you deem No.10 to have played the ball No.12 who is in front of him is offside and should be penalised. Another alternative to consider for No.12 is law 10.5. “The player can also be accidentally offside if that player cannot avoid being touched by the ball or by a team-mate”. This will result in a scrum to the opposition.

So many options available. Hope this answers your questions.