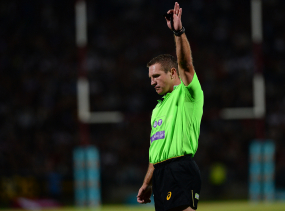 In his more active days, Lourens van der Merwe was a Test referee. Now he is more sedentary as a TMO. He was teaching at Grey College and the chairman of the Free State Referees' Society. Then he moved to Klerksdorp as the deputy principal of Hoërskool Wesvalia with plenty to keep him busy. But he is already involved in the Leopards Referees' Society and, bless him, he is always ready to answer readers' questions.

Question: During the test match played between Italy and Australia on last Saturday the Italian scrum-half, Tito Tebaldi, intercepted a pass made by a Wallaby jumper during a lineout and proceeded to score. The try was however disallowed because Tebaldi was deemed offside. Could you please comment this episode and explain the offside law at lineouts? Was Tebaldi offside at the beginning of the lineout because he was over the 15-metre line? Thank you very much/baie dankie!

There are two scenarios that we need to look at regarding the offside of the receiver, in this case Tebaldi. Firstly, Law 18 states regarding off side at a line out:

Law 18.31 Until the ball is thrown in, and has touched the player or the ground, the offside line for lineout players is the mark of touch. After that, their offside line is a line through the ball.

It was clear in Tebaldi's case, that he stayed behind the ball until the Australian jumper passed the ball to the scrumhalf.

If Tebaldi started beyond the 15m line before the ball left the lineout, or was thrown/passed over the 15m , Tebaldi would have been in an offside position.

Question: I have no doubt that this question has been raised many times, but there seems an incredible disparity between law and interpretation over when the ball has left the ruck and offside lines no longer exist. The Lawes incident in Saturday's game at Twickenham saw the ball clearly beyond the back foot of the ruck formed only by All Blacks with the receiver, not part of the ruck, with his hands over the ball. My questions are: why is the receiver considered to be part of the ruck when he cannot be pulled into it, when is the ball out of the ruck, when do offside lines no longer exist and as to current interpretation is the ruck law no longer being acknowledged by referees to simply make their job easier? The booing was not restricted to Twickenham, watching on the big screen at The Principality Stadium in Cardiff the South African/Australian'decision was met with considerable derision although, being Wales, the final score was cheered heartily. But will they be cheering on the 24th?

This is a very good question, and also a very important one - when is the ball deemed to be out of the ruck/maul/scrum? The law is quite clear in defining this issue:
Law 19.36. The scrum ends: a. When the ball comes out of the scrum in any direction except the tunnel.
Law 15.18. The ruck ends and play continues when the ball leaves the ruck or when the ball in the ruck is on or over the goal line.
Law 16.16. A maul ends and play continues when: a. The ball or ball-carrier leaves the maul.

In the All Blacks vs England incident, Lawes was never onside. So he didn't start in an onside position, where both his feet were behind the last part of the ruck. I clearly understand your frustration, because on the replay it looked as if the ball was lying outside of the ruck, i.e. that the ball had left the ruck and the ruck had ended. However, Lawes was still offside because he didn't start in an onside position.

I believe the Bokke will put up a great show this coming weekend, and silence the Red Dragon fans!

Question: England vs All Blacks the correct decision England player in a offside position, My question: the referee is in the best position to make the call and so why ask the TMO? It is a straightforward call offside.

This is a very valid question, and the replay shows clearly the referee looking at the incident. Of course, it would be the best outcome for the game if the referee made the decision at the time. I think it is the intention of the law to give the referee freedom of judgement to make the best rugby decision.

For me, this incident is the perfect example of why there is a TMO. Everybody watching the game could see that Lawes was off side and that this try should not be awarded. If there were no TMO, it would just be unfair towards the team, the spectators and most importantly the game.

The correct call was made. Well done, Marius Jonker!

Question: Law 14.11 c states that a tackle ends when the ball leaves the tackle area. How is the tackle area defined as I cannot find it in the laws or the clarifications Thanks

in order to define a tackle, we need to look at the definition.

The tackle area is then the area/space where these players are, with the ball a part of this area. The law doesn't provide us with a specific indication of the tackle area, for example within 1m around the players.

The area will be at the descretion of the referee, and he will need to apply this consistently throughout the game.

I hope I understand your question correctly. If the ball is lying free, and a player goes to ground in order to gain possession of the ball, no phase has formed. This is covered by Law 13: Players on the ground in open play.

Therefore the player may perform any action, except holding on the ball while lying on the ground.

Question: Team A are ahead by one point and are pinned down inside their own 22. The siren has gone. Lineout 5 metres from team A's try line. Team A has the throw in. They have been battling all game to secure there own ball. All they have to do is secure line out and kick ball out. The ball is not thrown in straight and team A wins ball in lineout. Normally it would be scrum to team B, but because siren has gone, game is over. If that throw into line out is deliberately skew, can penalty be awarded to Team B?

Very interesting question, and even more so the answer. Law 5 Time, adresses this issue of when should the final whistle been blown or not.

So, if a team throws the ball in skew, and no advantage can be played, the opposing team will still have the option of: retaking the line out or a scrum, with their put in.

Question: I have a simple question on a topic that is a major cause of confusion in modern rugby: when is the ball so out of a tackle or ruck that both teams are allowed to move forward and play it?

Those confused are players, referees, commentators and spectators - every honest one of them.

Please see Question 4 from Jens regarding this matter. As I said in my answer to Jens, as long as the referee applies the tackle area consistently, every one will understand and it would be fair. The team that can adapt the best to the referee's interpretation, will benefit the most. For me, this is also part of the art of coaching that still need much attention.

Question: Can you clear up offside in "Open Play" and does it technically exists - per law 10.1, it does seem to exist and a player offside in open play can be penalised if that player plays the ball, tackles a ball carrier or prevents the opposition from playing. Can you clarify? In addition, this happened in a recent game during open play - red 9 passes to red 10, the balls hits red 10 in the head and goes forward, red 12 who was standing in front catches the ball. Would you deem red 12 to be accidentally offside and award a scrum to the opposition or because red 12 intentionally played the ball (by catching it) would you deem this offside and hence award a penalty to the opposition. Your thoughts and explanation would be very much welcomed. Thanks and regards Graham

Good question re offside in open play. As you indicated, Law 10 covers Open play, and the Law states:

Law 10 OFFSIDE AND ONSIDE IN OPEN PLAY
A player is offside in open play if that player is in front of a team-mate who is carrying the ball or who last played it.
An offside player must not interfere with play. This includes:
a. Playing the ball.
b. Tackling the ball-carrier.
c. Preventing the opposition from playing as they wish

So yes, Graham, offside in open play does exist. Allow me to refer to your example where Red knocks the ball forward, and Red 12, who is infront of the team mate who last played the ball, now catches the ball. Red 12 is penalisable because he is deemed to be offside. If Red 12 didn't catch the ball, but the ball touches Red 12, then Red 12 would be seen as accidently offside and a scrum would follow. Because Red 12 catches the ball, he is interfering with play and therefore the penalty is the correct desicion.