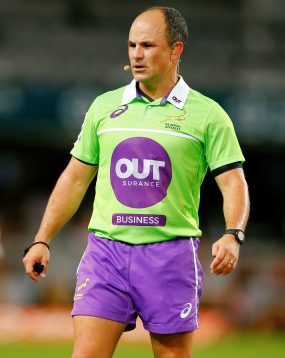 Just back from refereeing the Six Nations match between Wales and England in Cardiff, and doing it excellently, and even more recently back from Durban and the Super Rugby match between the Sharks and the Stormers, Jaco Peyper grabs a gulp of breath and answers readers' questions.

So assist me with some clarity on that please.

Jaco Peyper: Hi Manny – your understanding is correct – he may join the lineout only as the ball is thrown in. However, participating players (The receiver is a participating player) may change position with a player in the lineout (Swap is the rugby jargon) at any time before the throw – as long as the swap is completed at the time of throw and the new receiver is 2m out of lineout. Practically in the swap, you will, for example, see the player at the front step out and simultaneously the receiver join in any capacity of a lineout player (jump, lift, etc) and the throw-in is on its way in a split second timing.

Question: In the match between Stormers and Bulls on 3 February 2019, the Stormers No.8 charged down a kick from Pollard and scored a try. The referee asked the TMO whether the No.8 was offside. The TMO replied that he was offside but was put onside when the ball emerged from the scrum. Does this mean that Law 10.9 was changed?

A player can, however, be put onside in general play by either his own or team-mate's actions and in some cases by actions of the opposition as per Law 10.1-8.

Question: I note two aspects that are not applied in accordance with the laws of the game:

i. Putting the ball into the scrum. This is not penalized if it is put in in skew in favour of the team in possession of the ball.

ii. In a penalty situation and if the attacking team take a quick kick and go they are sometimes called back to the correct penalty spot, however, if a team kick for touch the kicker mostly overstep the penalty mark without any action.

Please clarify these for me.

Jaco Peyper: i. Hi Jaco, we have addressed this topic a few times on the site.

Team A knocks the ball on. Then Team B who did not infringe puts the ball in the scrum, but putting ball dead set in the middle of the scrum is not fair as they have to lift a foot off ground to hook – therefore 7 players scrum against 8 and the non-infringing team under pressure through Laws. Therefore the laws have been relaxed in order to make it more logical and fair and balanced so that the non-offending team can put the ball in closer to their side as long as it requires a hook/strike. This what coaches and players at top end of the game want and it leads to more completed scrums and attacking rugby vs resets (time-consuming) when hookers have to reach deep into the scrum with the result that it collapses or the attackers get bad ball because 7 are scrumming against 8. So the relaxed interpretation is for the sake of better product – but not to cheat and to save a weak scrum. The feed still needs to be hooked and credible – but not dead straight!

ii. The reason would be that if a player is allowed to quick tap from where he is – instead of on the mark of infringement – the quick tap becomes ‘undefendable’, as within a second players can run just under 10m these days and there will be no way for a player to defend because most likely everybody is nearer than 10m of the quick tap at that point… So it’s not being pedantic but, in the interests of fair play so that defenders can have a fair chance to defend, we require the tap to be realistically near the mark. Kicking to touch sometimes makes a difference – but coaches and players seem not to be that eager for us to be strict about 1m there, as the ball going into touch 28m downfield or 29 metres is much the same for them and they can then reset their defence setup and fairly defend whatever attackers throw at them from that lineout.

Question: In the Bulls Stormers game, Rosko Specman scored two tries. In his second try, he was tackled in front of the try-line. Was he held in the tackle and then stood up to score. If he was held, should it have been a penalty to Stormers?

Jaco Peyper: Hi Lodewyk – even if a player is held, he may still use momentum to score a try – that per law being in “one continuous movement”. There was no tangible stop in that tackle and Jano Vermaak actually helped Rosco in an effort to tackle him, rolling him across the line and keeping his momentum.

Once the momentum/continuous movement stops – the player may still reach to score, but not by propelling himself forward again (hence the name "double movement").

Question: How many seconds does a team have to form a scrum once the mark is made?

If a conversion is attempted and the ball falls short of the crossbar but bounces off an opposition player and crosses the crossbar, is it a goal or not?

Jaco Peyper: Hi Jack, it must be formed within 30sec of the mark being indicated, unless there is a legitimate reason for a stoppage in which case the referee will stop the running time. Teams deliberately delaying the formation of the scrum are liable to Free Kick and if repeated a Penalty Kick.

Part 2: Yes – as long as the ball has not touched the ground or a team-mate. Therefore the attempted charge down that brushes the fingers of the charging player at conversion or drop goal and goes through the post over crossbar = points!

Question: In an uncontested scrum for teams Under-10 to Under-13 must the scrum formation stay the same as in a contested scrum or must all players just be bound but do not have to be in formation? I have read the rules regarding uncontested scrums and nowhere does it say that players must be in the contested formation for uncontested scrums. All it stipulates is that the front row must bind to the other teams front row and that there must be 8 players in the scrum. If someone can please just confirm this it would really help me out.

Jaco Peyper: Hi Reinhardt – The formation stays the same for any scrum contested or uncontested. However, the players bind loosely to get off the scrum practically as they know they don’t have to push…