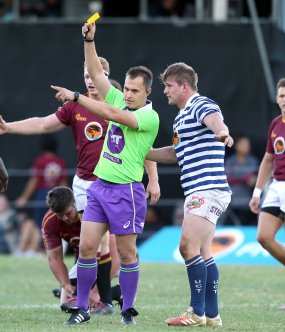 It seems there is no more offseason, not with all that's going on in Japan at the World Cup. Refereeing at the World Cup has been the subject of criticism and even anger. Marius van der Wewsthuizen is not there, but at home, having a break and using some time to answer readers' questions.

As per Law 19 Please see the requirements for the entire engagement sequence.

Law19
10. When both sides are square, stable and stationary, the referee calls “crouch”.
a. The front-rows then adopt a crouched position if they have not already done so.
Their heads and shoulders are no lower than their hips, a position that is
maintained for the duration of the scrum.
b. The front-rows crouch with their heads to the left of their immediate opponents’,
so that no player’s head is touching the neck or shoulders of an opponent.
Sanction : Free-kick.

12. When both sides are square, stable and stationary, the referee calls “set”.
a. Only then may the teams engage, completing the formation of the scrum and
creating a tunnel into which the ball will be thrown.
b. All players must be in position and ready to push forward.
c. Each front-row player must have both their feet on the ground, with their weight
firmly on at least one foot.
d. Each hooker’s feet must be in line with, or behind, the foremost foot of that team’s
props.
Sanction : Free-kick.

The ideal picture that everyone wants to see is for everyone in the scrum to push straight, we don’t want to see players being forced upwards or downwards in the scrum as this could cause serious injury.

Question: What is deemed to be advantage when the ref calls playing an advantage and the opposition gain 15m and then you go back to the penalty?

Unfortunately Advantage is one of those things that is not an exact science. The philosophy I use when playing advantage is “Have I given the team a real opportunity to be in a better position because I have elected to let play continue after an infringement by the opponents”.

There are a number a factors that one have to consider when applying advantage. Example. Team A have been pushed off their own ball at almost every scrum in the game, and so it would in effect not be a great advantage if I played a long advantage after a knock-on. They will be in more trouble if we actually have the scrum. I would call it over slightly quicker if I see they are better off if I did so.

Obviously one will always play a penalty advantage slightly longer than a knock-on advantage as the attacking team have many more options available to them. Advantage is a great tool to keep the flow of the game going but likewise it can open the referee up to be criticized when not applied consistently.

Question: What is permitted by linesman at primary school rugby level? For example: may linesman get involved with pointing out off side, or any illegal incidents etc

It all depends who appointed the Assistant referee / Touch judge for the game and what qualifications this person has to do the job. In order for them to have the full responsibilities of an assistant referee they would need to be appointed by the responsible Union. In this case it would be the Referees' society or Primary school referees' society. If the school appointed the person I would suggest they would only have the responsibility of a touch judge. They could then adjudicate touchline situations and kicks at goal. The rest needs to be done by the appointed referee.

Hope this answers your question.

Question: Have referees any jurisdiction over non-players who are hurling insults at players or the referee? What sort of verbals would cause a referee to react?

Everyone in the playing enclosure is there with the permission of the referee, that includes the medically trained personnel as well.

Everyone has different roles and responsibilities for that specific match and no one in the playing enclosure should try and intimidate or influence the referee in any way. If the referee or assistant referees feels that any person is doing so, the referee can revoke their privileges and they should be removed from the playing enclosure. Play should not continue until that person has been removed. It is not really something we would like to see, but the integrity of the game should always stay a top priority.

Question: Are referees scared to let play go on when the ball bounces forward off a player's chest without touching his hands? Or when the ball goes behind his hands, slips down and rolls forward?

I don’t think that is the case. It all depends what the referee has seen in the moment. We all know that the scenarios you have pointed out do not constitute a knock on and should be ruled accordingly. That is why in all training and coaching courses referees attend the overarching philosophy is always to referee only the clear and obvious.

Question: What is the best way to organise the toss before a match?

There are some guidelines in law how this should take place. Please see below.

I always find it strange when the referee actually tosses the coin as this is outside of law. I would suggest the following.

i. Work through the team manager and set a fixed time when the toss will take place. Do it at a central place that is convenient for both teams.
ii. Try and do the toss as long as possible before kick off. (Professional rugby is normally 45 – 60 minutes before kick off)
iii. Don’t leave it for the last minute as it will just create more interference. It is very disruptive for teams if the Captain gets pulled out during the warmup.
iv. Check with the teams before the toss that they are ready to decide what they want to do once the toss is completed. Again this will disrupt the referee or team warmup if they don’t tell you there and then.
v. I always try and do all admin tasks as soon as possible so that one can focus at the job at hand and that is to referee the game.