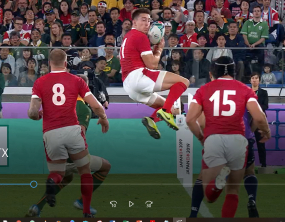 We have a question which suits an incident in the Rugby World Cup semifinal between South Africa and Wales in Yokohama on Sunday.

The question comes from Louis Boizard.

Question: When opposition kick the ball, I catch the ball with my body in the air and I land outside the sideline, who gets the throw in?

The incident which illustrates the question and indeed may have given rise to the question was in the 26th minute of Sunday's match.

Handré Pollard of South Africa kicks high and long towards the touchline on his right. Josh Adams, the Welsh left wing, jumps in the field of play, catches the ball and lands in touch. The assistant referee awards the lineout to South Africa. The referee agrees with the decision.

The law makes it clear that the assistant referee was right in his decision.

There is an import definition to keep in mind when you read the laws, especially Law 18.1 b ii. It is a definition of the plane of touch.

Plane of touch: The vertical space rising immediately above the touch line or touch-in-goal line.

Law 18 TOUCH OR TOUCH-IN-GOAL
1. The ball is in touch or touch-in-goal when:

2. The ball is not in touch or touch-in-goal if:

To answer Louis's question it is important to know where the ball was when he caught it. If the ball had not reached the plane of touch, i.e. was in the air above the field of play, when Louis caught it, it was the opposition's ball. If it had been above the plane of touch or beyond it, it would be Louis's team's ball.

Clearly from the replay, the ball had not reached the plane of touch when Adams caught it and his jump then carried it into touch.

The assistant referee was right.

It makes sense really. Adams's leap prevented the ball from any chance of falling in the field of play.