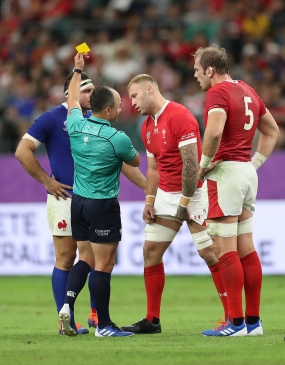 The query this time comes from Iñaki Marquinez of Spain and is answered by Jaco Peyper, one of the very best referees in the world. The question arises from a clip on the South African Referees' website: https://www.sareferees.com/laws/view/2831520/.

Question: Our Union, as others all around the world, is trying to involve us in work during this time. I have to send some clips with moves about Laws 14 and 15.

It is very interesting with the “help” of the ref to the defenders, a good topic to argue about.

But what has attracted my attention is the end of the “move”, when number 13 gets the ball by throwing himself to the ground. That is illegal, isn’t it?

Jaco Peyper: It's an interesting scenario!

I fully agree it is not a referee's job to invite a team (coach) to play that ball by stating it's out.

However, if he reacts to a question of the player who wants to play, or after the player takes off to indicate to the others (players, crowd, viewers) why he allows the play – it is a positive contribution by the referee as long as he is accurate and fair!

Regarding the question on Law 15.16 “players must not” applies only “during the ruck”.

Thus when the ball is clearly out of the ruck [the ruck has ended Law 15.18] = open play and a player may then go off his feet to win the ball in accordance with Law 13.1 – as long as it is not foul play or killing the ball, meaning he must:

So my reading is that this player is doing it perfectly within what the law allows.

BUT often players trigger too early. Either they move forward (offside) before ball is out or dive on the ball itself still emerging (leaving) the ruck, i.e. the ruck has not ended yet!