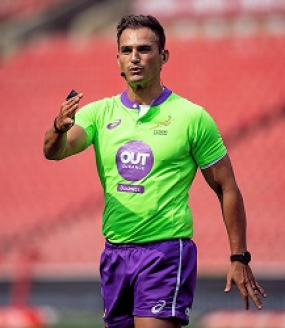 AJ, one of our top referees, spends some time, while preparing for the HSBC 7s circuit, to answers some questions received from our fans.

Question: If from a set play (Scrum or lineout) or open play the ball is taken back into your own 22m with a pass, but a tackle is now made within your 22m from the pass that took the ball back in your 22m. A ruck is formed, are we allowed to now kick out on the full from that ruck, or do we need to initiate another ruck inside our own 22m before having the opportunity to kick directly into touch?

Answer: Hi Lutfi, I like the way you think and a good question.

Once the ball is carried back into their 22m and a ruck is formed the team is allowed to kick the ball directly into touch, they don’t have to set up another ruck.

As we read in LAW 18.8d there is a gain in ground if a tackle, ruck, or maul took place within the 22 or an opponent touched the ball within the 22, irrespective how the ball got there.

Question: #9 Red tips and goes from a penalty. The blue team is not 5 since this happened on the 5-meter mark. The blue team holds him and then #3, #28, and #1 pick him up when he falls to the floor after a maul had formed. Then slam him to the floor with his head. What is the appropriate decision?

Answer: Hi Siphesihle, you got me thinking about this question and I believe you saw this in a game that happened recently, let's break it up as it happened.

Step 1: Quick tap by #9 and the blue team offside

As a referee, you will be playing advantage for the offside by the Blue Team.

Because of the action of the Blue team, we now have foul play.

Because of the action of the Blue team, the question that needs to be asked is: “would a probably try have been scored”. If YES, then a penalty try against the Blue team.

Penalty try: Awarded when, in the opinion of the referee, a try probably would have been scored (or scored in a more advantageous position) if not for an act of foul play by an opponent.